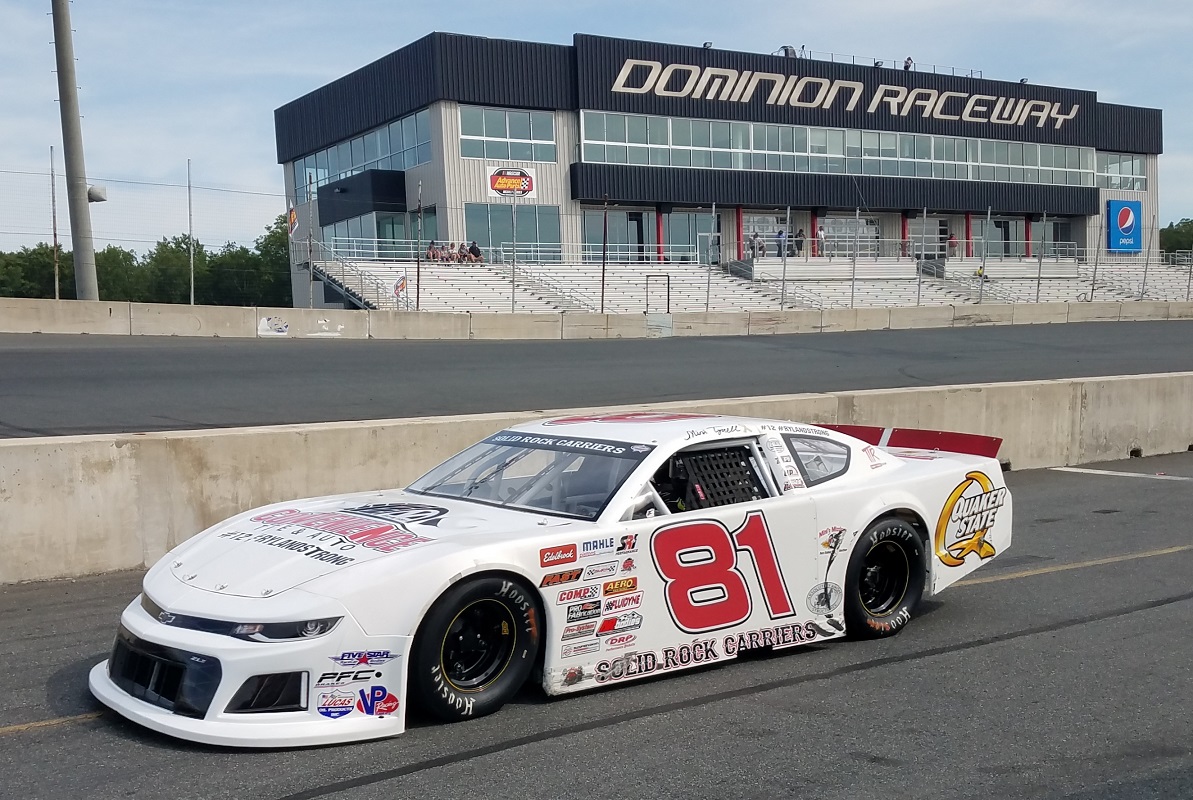 "It's a funny thing coming home. Everything looks the same, feels the same, even smells the same. You realized what's changed is you." -- F. Scott Fitzgerald

For Mini Tyrrell and the #81 Mini T's Fastest Grease In The East team, the event at Dominion Raceway in Thornburg, Va. was on their radar for months as a possible breakthrough night. Although the Radley Chevrolet 125 didn't end in the manner the driver most preferred, it was still another solid effort with his second consecutive 6th place finish on the CARS Tour.

Dominion Raceway is located less than an hour south on I-95 from Mini's hometown of Manassas, which brought legions of family and friends to the track to watch the 16-year-old phenom in action. The ovation that Mini received during driver introductions spoke volumes on who the fan favorite would be during the 125-lap race.

Mini qualified a strong 3rd on the grid, which matched his best CARS Tour start of the 2021 season. It was Mini's 4th top-4 start in 7 races. He lined up on the inside of the second row, directly behind polesitter Daniel Silvestri.

As the sun began setting beyond turn 3, CARS Tour flagman Brandon Willard unfurled the green flag as the drivers powered into turn 1. Almost immediately, Willard displayed the yellow caution flag after a chain reaction crash swept up Deac McCaskill and Sam Butler. The melee ensued when rookie Grant Thompson struggled with his gear box as the outside line slowed. A brief red flag was needed for track cleanup.

On the restart, Mini settled into 3rd place behind Silvestri and Mike Looney for a few laps. On lap 4, he moved to the inside and took the runner-up spot from Looney. He ran comfortably in 2nd place until the first competition caution on lap 30. On the ensuing restart he briefly challenged Silvestri for the top spot, but settled into 2nd place. The final competition caution came on lap 60. Mini told crew chief Brandon Butler that the car had begun getting tighter in the corners.

On the restart, Mini was able to hold off Looney and ride in 2nd place. However, Looney eventually worked his way around Mini for the spot on lap 66. The next caution came on lap 83 for an incident involving Layne Riggs and Jonathan Shafer.

As the laps wound down, the tight handling condition severely impeded Mini's efforts. He slipped to 4th when Jared Fryar passed on lap 86. One lap later, Kaden Honeycutt went by to send Mini to 5th place. On lap 103, Justin Johnson moved to the inside to take a spot as Mini settled into 6th place. Bobby McCarty was steadily closing on the #81 Chevrolet in the closing laps, but Mini held on for a 6th place finish. At the front of the field, Silvestri cruised to his first career CARS Tour victory.

It was Mini's second consecutive 6th place finish, which tied his best effort of the season. In his last 7 CARS Tour races in his home state of Virginia, Mini has 6 top-8 finishes and an average finish of 6.7. The finish allowed Mini to climb into the top-10 in the CARS Tour points standings.