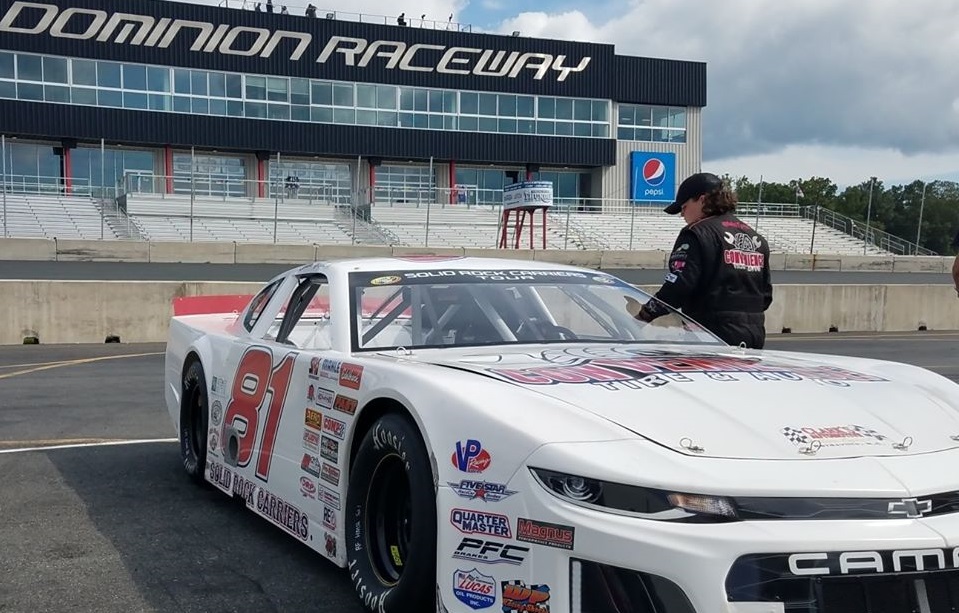 "Some days in August at home are like this, the air thin and eager like this, with something in it sad and nostalgic and familiar." -- William Faulkner

There's truly no place like home. For the second consecutive week, Mini Tyrrell and the #81 Mini T's Fastest Grease In The East team posted a career best finish on the CARS Tour with a runner-up effort at Dominion Raceway in Thornburg, Va.

With hundreds of family and close friends in attendance to support the driver from nearby Manassas, Va., Mini started the Radley Chevrolet 125 on the outside of the third row. He entered top-5 on lap 4 and slipped past Brandon Pierce for fourth place prior to the first caution on lap 9. His march forward continued on lap 12 with a move around Corey Heim. As the race neared the halfway point, Mini remained in third position.

However, he dropped a spot to Layne Riggs after a restart on lap 60. Pierce passed a few laps later as Mini fell to fifth prior to a caution for Nolan Pope's crash. After getting around Pierce, he jumped to the runner-up spot when Jared Fryar slowed and brought out a caution.

Mini inherited the race lead when Riggs came to pit road under caution on lap 75. On the restart, Mini lined up along side Jonathan Findley. The pair battled door to door down the frontstretch with Findley assuming the top spot on lap 76.

A caution with 25 laps to go brought the field together for a restart. Mini held the outside line and was able to get in line behind Findley. He cut the gap to a half-second with 15 laps to go, but Findley was able to stretch his lead in the waning circuits. With 2 laps to go, Chad McCumbee stopped on the track to bring out a caution and set up a dramatic finish.

With Findley comfortably in the lead en route to his first CARS Tour victory, Mini fought on the outside line as contact between Jonathan Shafer and Brandon Pierce at the checkered flag resulted in the #81 car spinning sideways into turn 1. Layne Riggs and Justin Johnson avoided Mini's car which came to rest in a vulnerable position with the driver's door facing the oncoming finishers.

Mini has now posted back-to-back top-3 finishes for the first time in his CARS Tour career.

MINI'S COMMENTS
ON THE RACE: "I was trying my hardest to catch (Findley) there at the end. We got that caution, but we didn't get the restart I would have liked. We still came home with a second and this gives us confidence."

THE FINAL LAP: "I got into turn three and was pushed around a little bit and then got wrecked coming across the line.... We were able to hold onto it and not damage too many racecars."