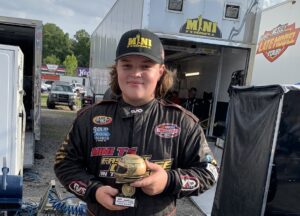 "The positive and courageous voice will always emerge, somewhere, sometime, for all of us. Listen for it, and your breakthroughs will come." -- Pat Riley

Mini Tyrrell and the #81 Mini T's Fastest Grease In The East team finally had a breakthrough performance worthy of their effort and determination. Mini captured his first career CARS Tour pole position and backed that up with a career best third place finish on the CARS Tour in the Catawba Valley 125 at Hickory Motor Speedway on August 1.

Mini qualified 5th in the spring race at Hickory and crew chief Brandon Butler brought the same chassis back for the mid-summer venture to the historic .363-mile bullring. He was fastest in the first practice session on Friday, and was second in both sessions after that.

Mini turned a lap of 15.27 seconds in qualifying late on Saturday afternoon. He was the second driver to turn a lap, which meant waiting anxiously on pit road as the field made their qualifying runs. After the last car completed their run, Mini looked up with amazement as the media descended on the first-time series polesitter.

Mini was given the pole trophy by CARS Tour representative Jacklyn Drake. He celebrated the moment with his parents, the #81 race team, engine builder Rayvon Clark, Kirk Ipock, owner of Solid Rock Carriers, and Bob Lowery from Carteret County Speedway. He later visited with Jay Hedgecock to thank him for sponsoring the pole award.

As the sun descended in the western sky, Mini led the CARS Tour Late Model field to the green flag with defending series champion Bobby McCarty on the outside. McCarty held a tight line heading through turns 1 and 2 and emerged with the race lead on the opening lap. Mini settled into second place and challenged McCarty at times over the first 35 laps before a caution flag slowed the field.

On the restart, McCarty chose the outside line and used that to his advantage. Mini held off challenges from Jonathan Shafer, Brandon Pierce, and Trevor Ward as the race approached the mid-stages. A competition caution slowed the field with Mini again holding onto the runner-up spot on the ensuing restart. The final caution came with less than 50 laps to go.

McCarty again jumped into the lead on the restart with Mini in tow. At the urging of his sagacious crew chief, Mini began experimenting with a higher line in the hopes of catching McCarty. As the laps wound down, Jared Fryar made inroads in third place and challenged Mini for position. Fryar eventually took the spot but was unable to catch McCarty for the race victory. Mini brought the #81 Chevrolet to the checkered flag in third place.

After a challenging start to the 2020 season that saw Mini post 3 DNF's in as many races, the #81 team rebounded with a major breakthrough performance in Hickory.

"Listening to the voice that counsels courage, that affirms your life and your ability will put you in a position to do your best." -- Pat Riley

On a nearly full moon August night, Mini embodied the words of the legendary basketball coach. He embraced the moment and seized the opportunity for a career best effort on the CARS Tour.