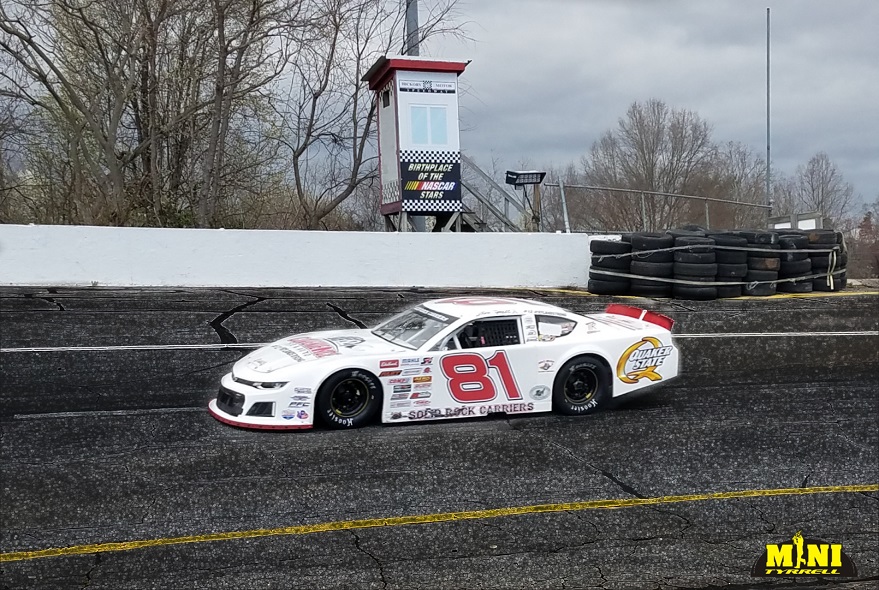 After a string of disappointing finishes dating back to last season, Mini Tyrrell and the #81 Mini T's Fastest Grease In The East team put together a much-needed 7th place effort in the CARS Tour race at Hickory Motor Speedway.

The finish was a direct result of the driver's pre-race strategy session with crew chief Brandon Butler that worked with flawless precision. After qualifying 14th, Mini came to pit road for a last minute check on the pace lap. The stop sent him to the rear of the field when CARS Tour flagman Brandon Willard waved the green flag.

Mini ran in 24th place -- the tail end of the field -- to conserve tires on the abrasive racing surface of the .363-mile track. As the 150-lap race approached the 50-lap mark, Mini was intentionally approximately 2/3 of a lap behind the race leader. He occasionally closed the gap to Jared Fryar for position at the tail end of the field, but wasn't pushing the issue by any stretch.

The race moved past the halfway point with leaders Mike Looney and Bobby McCarty rapidly approaching Mini to put him a lap down. At his crew chief's urging, Mini began picking up the pace and gained several spots to enter the top-20. The goal was simply to conserve tires until the first caution flag. However, as the 100-lap mark approached and the race remained caution-free, there was concern about the laps running out before Mini had a chance to move forward.

On lap 110, race leader Mike Looney got together with Jonathan Shafer as he tried to put the #91 car a lap down. The resulting caution flag allowed Mini to come to pit road for a track bar adjustment from car chief Dan Givens.

At Brandon Butler's expert urging, the Captain dropped the jib and hoisted the spinnaker for the downwind run to the finish. Over the next 19 laps, he gained 10 positions as the tire conservation strategy began paying immense dividends.

The next caution came on lap 129 for a crash involving Mason Diaz. As the laps wound down, Mini moved up to 7th place and was on the verge of a potential top-5 finish. However, a caution with 3 laps to go involving Jack Wood made the final climb forward more challenging. Mini moved to the inside of Jonathan Findley in a battle for 6th place, but ultimately came across the finish line in 7th.

It was Mini's first top-10 of the season and his best finish since a 4th place result at Langley Speedway last summer.