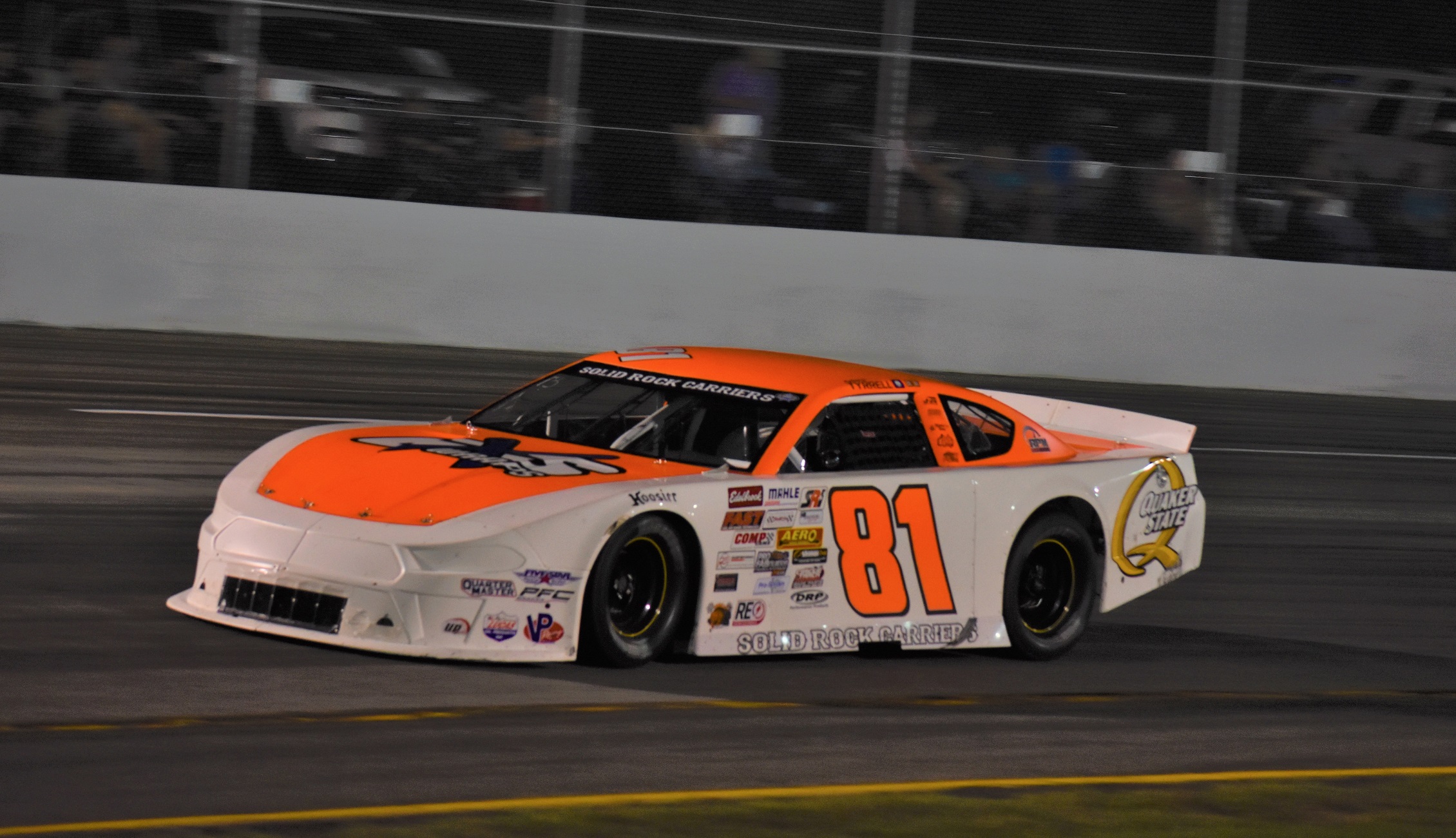 "It's not about standing still and becoming safe. If anybody wants to keep creating, they have to be about change." -- Miles Davis

After a series of middling finishes in 2021, Mini Tyrrell and the #81 Mini T's Fastest Grease In The East team knew that a change was needed. The burgeoning dominance of R&S Race Cars on the CARS Tour this season necessitated a change in course. For the race at Langley Speedway, Mini opted to rent an R&S car from Justin Johnson's race shop. He turned in his best performance of the 2021 season with a 6th place finish.

The team arrived at the track for testing on Thursday under ominous skies. Early morning rain gave way to partly cloudy conditions. After track drying from Quality Control, Mini made a pair of test runs to get a feel for the chassis and its capabilities. The skies opened with a deluge of storms shortly after Noon, which canceled the remainder of the day. The team returned on Friday for CARS Tour practice and participated in two sessions before the rains came once again.

On race day, the car was decaled with Mini's familiar #81 -- in bright orange. He raced through two early practice sessions and turned the fastest lap on a mock qualifying run in the final stanza. Mini and crew chief Brandon Butler were optimistic for qualifying in the late afternoon. After CARS Tour official Joe Louis flipped his handheld panel to 'Go' at the end of pit road, the 16-year-old driver turned a lap that was second fastest among the 13 drivers who had made qualifying attempts.

By the end of the qualifying session, Mini slipped to 4th on the starting grid. R&S Race Cars captured the top-5 positions on the grid led by the front row of Kaden Honeycutt and Justin Johnson. The unbridled exuberance of R&S Race Cars owner Marcus Richmond was truly infectious as he congratulated Mini on the strong qualifying effort.

As night enveloped coastal Virginia, CARS Tour flagman Brandon Willard waved the green with Mini on the outside of the second row. He established his spot in 4th in the early laps behind race leaders Honeycutt, Johnson, and Deac McCaskill. On the restart after a caution on lap 10, he raced side-by-side with Timothy Peters for the next four laps. Using the outside line, Mini was able to hold off Peters to maintain the 4th spot.

A caution on lap 56 for Daniel Silvestri's cut tire bunched the field. The next caution came just a half lap after the restart for a crash involving Peters and Jonathan Findley. On the next restart, Mini raced along side McCaskill for a lap before moving up to 3rd place on lap 58. However, McCaskill was able to work his way around Mini on lap 68. As the leaders became more distant beyond his front windshield, Layne Riggs and Jared Fryar closed in on the rear bumper.

Riggs took 4th from Mini on lap 92 and Fryar went by one lap later. Mini settled into 6th place as the laps wound down. When the checkered flag was unfurled in Willard's hand, Mini was 6th across the finish line, comfortably ahead of Sam Yarbrough. At the front of the field, Honeycutt, Johnson, and McCaskill finished in order for a 1-2-3 finish for R&S Race Cars.

The 6th place effort was Mini's best finish of the season, and best since Langley Speedway in August 2020 where he finished 4th. On the heels of the finish, he moved to within 6 points of the top-10 in the CARS Tour points standings. Mini and the #81 team will be back in action on June 19 at Dominion Raceway.