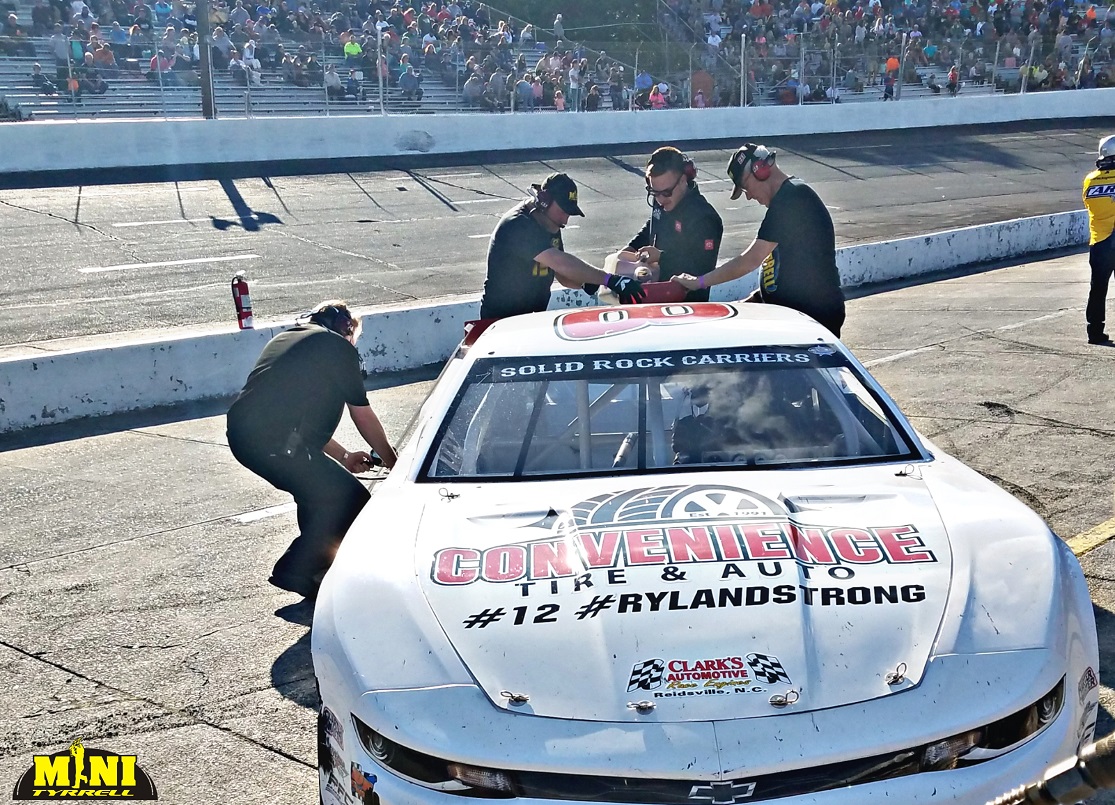 Often times, the races that drivers remember most aren't necessarily the victories. They're often the races where they've stared down adversity to put together a solid effort. For Mini Tyrrell and the #81 Mini T's Fastest Grease In The East team, a hard fought 13th place finish in the CARS Tour Old North State Nationals at Orange County Speedway in Rougemont, N.C., can be classified as a race where they overcame obstacles to move forward.

Mini qualified 13th on the grid after battling a tight condition on his 2-lap run. Crew chief Brandon Butler expected the handling of the #81 Chevrolet to be better under race conditions. Shortly after flagman Brandon Willard waved the green flag on a sun-drenched afternoon, Mini used the inside line to pass Mason Diaz and Sammy Smith to move up to 11th place on lap 4. Two laps later, he advanced into the top-10 with a move around Brandon Pierce. However, the handling on the car became looser as the run progressed. He slipped back to 11th when Diaz passed on lap 19.

The first caution waved on lap 24. Mini gained a spot and restarted in 10th place after eventual race winner Josh Berry came to pit road. On the restart, Jared Fryar held the inside line and took a position from Mini. The next caution waved on lap 45. A miscommunication brought Mini to pit road a lap too early when the pits were closed. Thus, he was penalized and restarted at the tail end of the longest line in 23rd place.

For the remainder of the day, Mini's degree of difficulty was exacerbated by race traffic. After an incident in turn 4 on lap 62, Mini moved back into the top-20. He advanced up to 17th on lap 68 after getting by Sam Yarbrough and Craig Moore. However, he slipped back to 18th when Justin Johnson dove under him to take a spot on lap 73.

A caution on lap 93 for Joe Valento's wreck brought Mini to pit road. With a limited number of drivers opting to pit, Mini restarted in 21st place. He ran 20th at the halfway point of the Old North State Nationals. As the green flag run progressed, he took 19th from Daniel Silvestri on lap 119, and worked his way around Brandon Pierce to take 18th on lap 126.

The next caution waved on lap 142. Brandon called Mini to pit road for a tire change and adjustments to tighten the handling. He battled on the outside line after the restart and eventually took 17th place from Sammy Smith on lap 159. One lap later he moved into 16th after passing Conner Jones. On lap 162 he was running directly behind Jonathan Shafer when the #91 car brushed the wall off of turn 2 and then spun entering turn 3.

Mini restarted in 15th and advanced a spot when Layne Riggs came to pit road with damage to his hood. He moved into 13th place on lap 191 when Mike Looney slowed on the track. In the closing laps he battled Daniel Silvestri for 12th place, but was unable to complete the pass before the checkered flag waved.

The battle scars on the right side of the #81 Mini T's Fastest Grease In The East Chevrolet exemplified Mini's fight at Orange County Speedway. Overall, he passed nearly 20 cars during the race. Although track position and circumstances didn't work in Mini's favor, the challenge in overcoming adversity will pay dividends down the road.