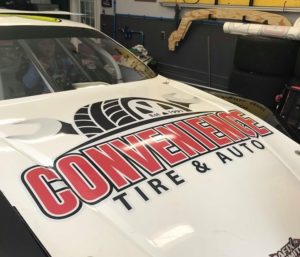 Mini Tyrrell and the #81 Mini T's Fastest Grease In The East team will begin their second full season on the CARS Tour in the Solid Rock Carriers 300 on March 7 at Southern National Motorsports Park in Kenly, North Carolina. Mini is coming off a rookie season where he posted 1 top-5 and 6 top-10 finishes to capture the TORP Chassis Rookie of the Year Award.

The 250-mile trek from Mini's home in Manassas, Va. to the 4/10-mile Southern National Motorsports Park takes him on a familiar section of the I-95 corridor. From his early days in go karts at King George Speedway east of Fredericksburg, to his current home track at Dominion Raceway in Thornburg, to his past Arena Racing success at the Richmond Coliseum, that stretch of blacktop has carried Mini to some of his greatest moments in racing. Which, of course, leads us further south on I-95 beyond the Commonwealth of Virginia, across the meandering Roanoke River, and to the scene of Mini's greatest night in racing on the high banked short track in Kenly, North Carolina.

The most impressive victory of Mini's career was the 2017 Thanksgiving Classic at Southern National Motorsports Park where he bested a field of veteran drivers to win the Limited Late Model feature. "Winning the 2017 Thanksgiving Classic was such a big moment for me and my team," Mini said. "It was the biggest win of my career and one of the few race tracks I could travel to at the time because of my age. It was also extremely special because I won the race at the age of 13."

The Late Model division on the CARS Tour in 2020 is arguably the strongest field in series history. "The CARS Tour features the best Late Model stock car drivers on the east coast," Mini said. "Being able to compete in this highly competitive series is an honor. I look forward to competing for a win when I return to Southern National on March 7. "

TEAM MINI:
We're pleased that all members of Mini's race team in 2019 will be returning for his second full season on the CARS Tour. To learn more about Mini's team led by venerable crew chief Brandon Butler, visit our Team Info page.

PAINT SCHEME:
The #81 Mini T's Fastest Grease In The East Late Model will have a black paint scheme with white flames for the season opening race.

SOUTHERN NATIONAL 2019:
Last year at Southern National, Mini started the season opening race from 18th on the grid, but was caught up in an early race incident and finished 19th.

CAROLINA IN MY MIND:
Mini will make his eighth career CARS Tour start in North Carolina. His best career finish in the previous 7 CARS Tour races in 'The Old North State' has been 8th place.

THANK YOU TO OUR PARTNERS:
Mini and the #81 team are grateful for support from Convenience Tire and Auto, Mini T's Fastest Grease In The East, Solid Rock Carriers, Friends of Jaclyn Foundation, Weber Rector Commercial Real Estate Services, and Absolutely Amish Structures.