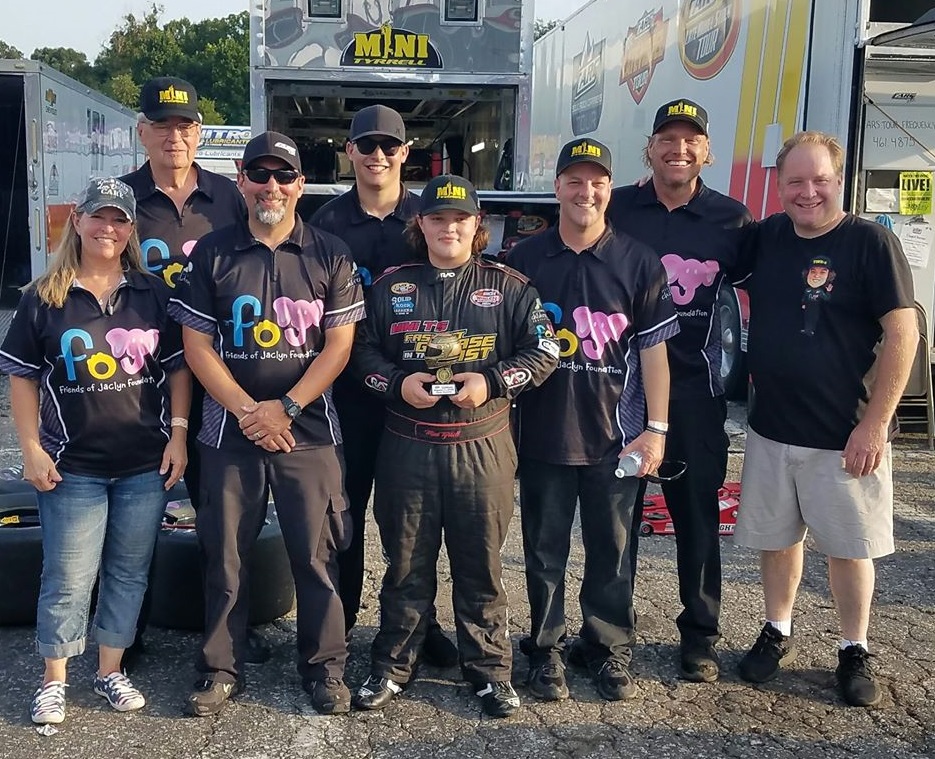 We are a race team. That five-word description is all-encompassing and to the point. But calling us a 'race team' may be simplistic and understated. We come together from diverse backgrounds with a defined purpose and mission: To help Mini become the best driver and -- much more important -- the best person he can be. It means so much to us when Mini runs well on the track or aces an interview with full preparation. After all, our focus at every outpost on the CARS Tour schedule is to ensure he has everything he needs for success during the course of the weekend. At the core, we are more than a race team. We are a family supporting, protecting, and elevating our own to the moon and back.

“When a gifted team dedicates itself to unselfish trust and combines instinct with boldness and effort, it is ready to climb.” - Pat Riley

OWNER: TIMMY TYRRELL
Timmy was born in Pennsylvania and moved to Northern Virginia in 1976. He became passionate about the automotive industry at the young age of 17 and started his own auto repair business. He has been self-employed for 30 years and owns Convenience Tire & Auto, a successful repair center in the Washington D.C. area. His father had a passion for cars and racing. Timmy started racing at the age of 16 and has been hooked ever since. His experience in racing and business has provided him with the needed leadership to take Mini and his racing career to the next level. Timmy is deeply entrenched in the community, having earned Rotarian of the Year honors in 2015-2016.

CREW CHIEF: BRANDON BUTLER
Mini's team is led by crew chief Brandon Butler, who has been with Mini since 2015. Brandon is a former NASCAR driver with numerous track and series championships to his credit. In 2001, he won 24 of 52 Late Model races capturing track championships at both South Boston and South Hampton which earned him the NASCAR Late Model Eastern Championship. Brandon has been an incredible force in the development of our race team, and he's been an amazing beacon in Mini's development as a driver and a person.

"I have seen hundreds of race car drivers in my career but Mini has more natural talent behind the wheel than anyone I have ever seen and doing this at such a young age is truly remarkable." - Brandon Butler

CAR CHIEF: DAN GIVENS
Dan Givens got involved with a dirt car team and through the years has transitioned to asphalt. He works full-time as an auto technician but keeps his weekends open to go racing with Mini. In many ways, Dan is the backbone of our race team. His work ethic and attention to detail are second to none. But, even more than that, Dan is an incredible role model and positive influence for our driver and our race team.

"Our small team has become so much more to me than just a weekend hobby. Timmy Tyrrell Racing has become like a small family to me and I feel so lucky to have become a part of such a special adventure." - Dan Givens

MECHANIC: GRAYSON CULLATHER
As a current Late Model driver, Grayson brings a unique skill set to Mini's team as a mechanic. He began his rookie campaign in 2015 at Southside Speedway in the U-Car series. He finished third in points collecting one victory on the season. After a successful rookie year, he made the move to the Late Model series at Southside in 2016. He finished fifth overall and captured Rookie of the Year honors. In 2017, Grayson became the youngest Late Model winner in Southside's history at 16 years old. Grayson has qualified for the annual Late Model showcase event at Martinsville Speedway for three years, which has given him current knowledge to assist Mini and the race team.

COMMUNICATIONS/PUBLIC RELATIONS: LARRY GRAFF
Larry has more than two decades of experience as a writer and journalist. Along with Mini, he shares a passion for childhood cancer fundraising, having raised nearly $250,000 for research and quality of life services through online fundraising and community events on a national level for Make-A-Wish and the Jeff Gordon Children's Foundation. Larry first met Mini and his family in 2012 at Mini's charity kickball event and has been a great friend and teammate since then.

"Without a doubt, my closest teammates in the fight against childhood cancer have been Mini and his family. It would be easy for people to assume that the bond we share is about motorsports. And that would be incorrect. The bond we share was forged through the fire of pediatric cancer. It's about doing everything from the heart, being there for the people you love, and giving far more to others than you could ever receive." - Larry Graff

TIRE SPECIALIST: LARRY LINDSAY
Mini's dad, Timmy, has been doing Larry's auto maintenance for nearly 30 years. Mini's paternal grandparents were his neighbors when his dad was in high school. In recent years, Larry found out that he has a tie to Mini's maternal grandparents. Larry is a retired Engineer Officer in the U.S. Army. Mini's grandfather was in the Army at the same time he was and they both started the same year. With racing, Larry went to Shenandoah Speedway in 2017 and watched a few races. In 2018, the team invited him to Carteret County Speedway to help out and his involvement has grown from there.

"Larry is a great man. I've known him since I was a baby. He works extremely hard on the team, really funny, incredibly smart, honorable man and I love that he salutes the flag during the National Anthem." - Mini Tyrrell

QUALITY CONTROL: COLIN BUTLER
Colin has known Mini since he was 9 years old as his father has served as Mini's crew chief since 2015. He spends most race weekends assisting the crew members on a variety of tasks. Colin is a former Bandolero driver having posted a solid top-5 finish against a strong field at Shenandoah Speedway. Beyond racing, Colin is an elite basketball player who aims to play at the collegiate level.

"I've been friends with Mini for more than 5 years. He's a great driver and an even better person. I respect his talent and ability to make a difference in so many lives." - Colin Butler

PIT SUPPORT: RYAN DAY
Ryan has known Mini's dad Timmy for 35 years. Through high school, getting married, and having kids, they've always been good friends with a common interest in cars. At the track, Ryan assists with loading and unloading the car and equipment and helps the other team members.

"My daughter Ella was diagnosed with brain cancer when she was 6 years old and became Mini's inspiration to raise funding and awareness of childhood cancer. That makes it truly special to be part of his race team and also help when he does fundraisers for childhood cancer." - Ryan Day