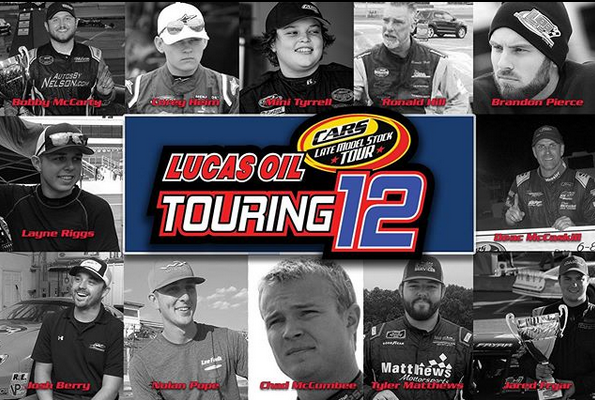 MANASSAS, Va., February 7, 2020 -- For the second consecutive year, Mini Tyrrell has been selected by the CARS Solid Rock Carriers Tour to be part of its Lucas Oil Touring 12 incentive-based program. The driver of the #81 Mini T's Fastest Grease in the East Late Model is entering his second full season on the Late Model series which races primarily in Virginia and North Carolina.

The Lucas Oil Touring 12 program, which is now in its third year, is designed to reward Late Model teams who commit to running a full season with the series. "Being selected for the second year is a huge honor for me," Tyrrell said. "This program has a stout group of very talented drivers and I really appreciate the opportunity to represent the CARS Solid Rock Carriers Tour on and off the track again. Being a part of this program not only helps our small team financially, but through the Tour's coordinated events, meet and greets, and social media, it helps myself and my team professionally and opens up opportunities for us."

Tyrrell, 15, captured the TORP Chassis Rookie of the Year Award in 2019. The Manassas, Virginia driver had an impressive rookie season with 1 top-5 and 6 top-10's. His 1,469 laps completed was the second-highest total among all CARS Tour Late Model drivers.

"My rookie season taught me lot," Tyrrell said. "The competition is incredibly fierce in this series with zero room for error, By having to quickly adapt to new tracks, I learned so much. Capturing the 2019 TORP Chassis Rookie of the Year Award against a stellar class of drivers was the highlight of the year. My team and I worked so hard and am proud of our accomplishments."

The first CARS Solid Rock Carriers Tour race for Tyrrell will be the Solid Rock Carriers 300 presented by SRI Performance on Saturday, March 7, at Southern National Motorsports Park in Kenly, North Carolina. The 150-lap race is scheduled for a 3 p.m. green flag.

"I can't wait to start the 2020 CARS Solid Rock Carriers Tour," Tyrrell said. "I'm looking forward to once again going head to head with the best of the best in Late Model stock cars, revisiting tracks, and trying to conquer those I haven't mastered yet. It's going to be another challenging and exciting year."

Tyrrell has been racing full-size late models since he was 9 years old. Off the track, he has raised more than $470,000 for childhood cancer and other causes through his Mini's Mission fundraising program. Tyrrell has 16 late model wins at Shenandoah Speedway in Virginia, and was the track's 2016 and 2017 Late Model track champion.