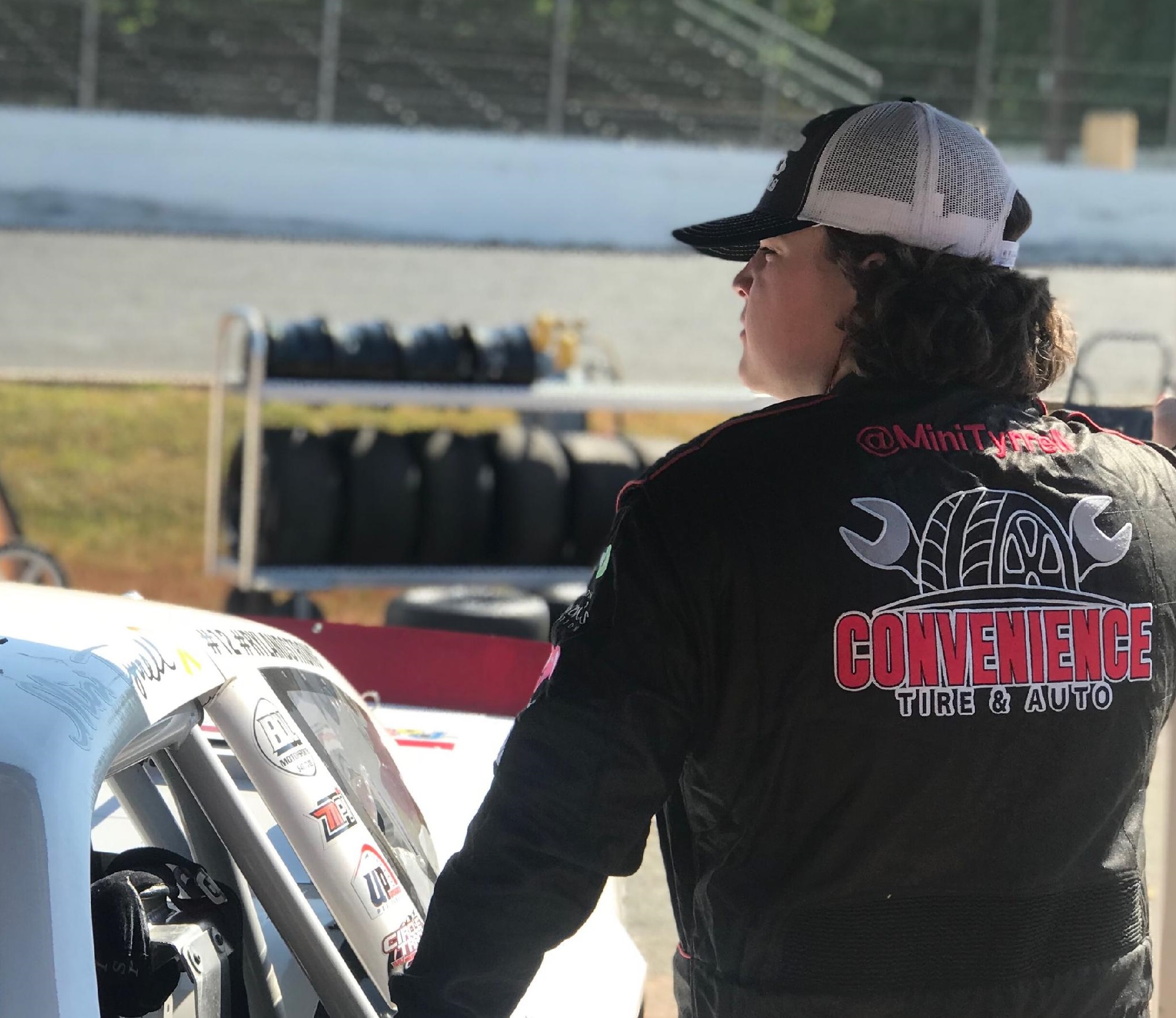 "Adversity carries a positive charge. It strips away all the nonessentials and forces you back to your basic strengths. Adversity shoves you down to your core values and beliefs, to the people who matter most." -- Pat Riley

After a strong afternoon of practice at Caraway Speedway on Friday, Mini Tyrrell and the #81 Mini T's Fastest Grease In the East team were hopeful of a breakthrough in Saturday night's CARS Tour race, which honored the memory of technical inspector David 'Lightning' Saunders. However, a 14th place finish was below the expectation of the driver and the race team.

He qualified 13th on the grid, which wasn't indicative of how strong his qualifying effort was. In a twist of unfortunate luck, he was the second car on the track to make a qualifying lap when the late afternoon sun in the Caraway Mountains made the track surface hotter and slicker. Within minutes of Mini's lap, clouds began engulfing the mountains as the temperature cooled. Drivers that Mini outpaced in practice suddenly picked up enough speed to start ahead of him on the grid.

Nevertheless, Mini and crew chief Brandon Butler expected to make gains once the green flag waved. When CARS Tour flagman Brandon Willard waved the green, Mini lost two spots as the outside line advanced. He settled into 15th place but was unable to make forward progress through the first 25 laps. He dropped back to 17th on lap 27 when Mason Diaz and Layne Riggs powered by him.

Mini gained a spot on lap 31 when Mike Looney slowed on the track and came to pit road, however Sam Butler took a position from him one lap later. Contact involving Jonathan Findley and Mason Diaz on lap 36 brought out the caution. Mini made slight contact with Butler while checking up.

He restarted in 14th place on lap 36 and engaged in a side-by-side battle with Trevor Ward for 3 laps. However, he was unable to power past Ward and then dropped to 15th when Conner Jones passed on lap 41. Seven laps later, Findley dove to the inside of Mini entering turn 3 and spun out to bring out the caution.

With relatively few cars behind him on the track, Mini came to pit road for adjustments. Car chief Dan Givens raised the track bar and an air pressure adjustment was made. He returned to the race in 18th place. He passed Joe Valento on lap 54 to take 17th, but his forward progress stalled.

A caution for Jonathan Shafer's spin on lap 75 allowed Mini to gain a few spots and restart in 14th. He lost a position to Diaz on lap 81, and another to Valento on lap 85. He briefly moved back into the top-15 when Layne Riggs' night ended prematurely on lap 91, but slipped to 16th when Shafer passed on lap 113.

As the laps wound down, Mini allowed the race leaders to battle among themselves and he went a lap down with 10 to go. A caution on lap 122 for Daniel Silvestri's spin set up an intense finish. Being a lap down at that point, Mini's strategy was simply to finish the event with the car intact. In the final laps, Dylan Ward and Conner Jones dropped out of the race which allowed Mini to gain positions. He came across the line with a 14th place effort.

Mini and the team has faced scores of adversity through the first 5 races of the season. Ultimately, when challenges arise, the driver and the race team rely on their shared covenant and the ties that bind. Forevermore.