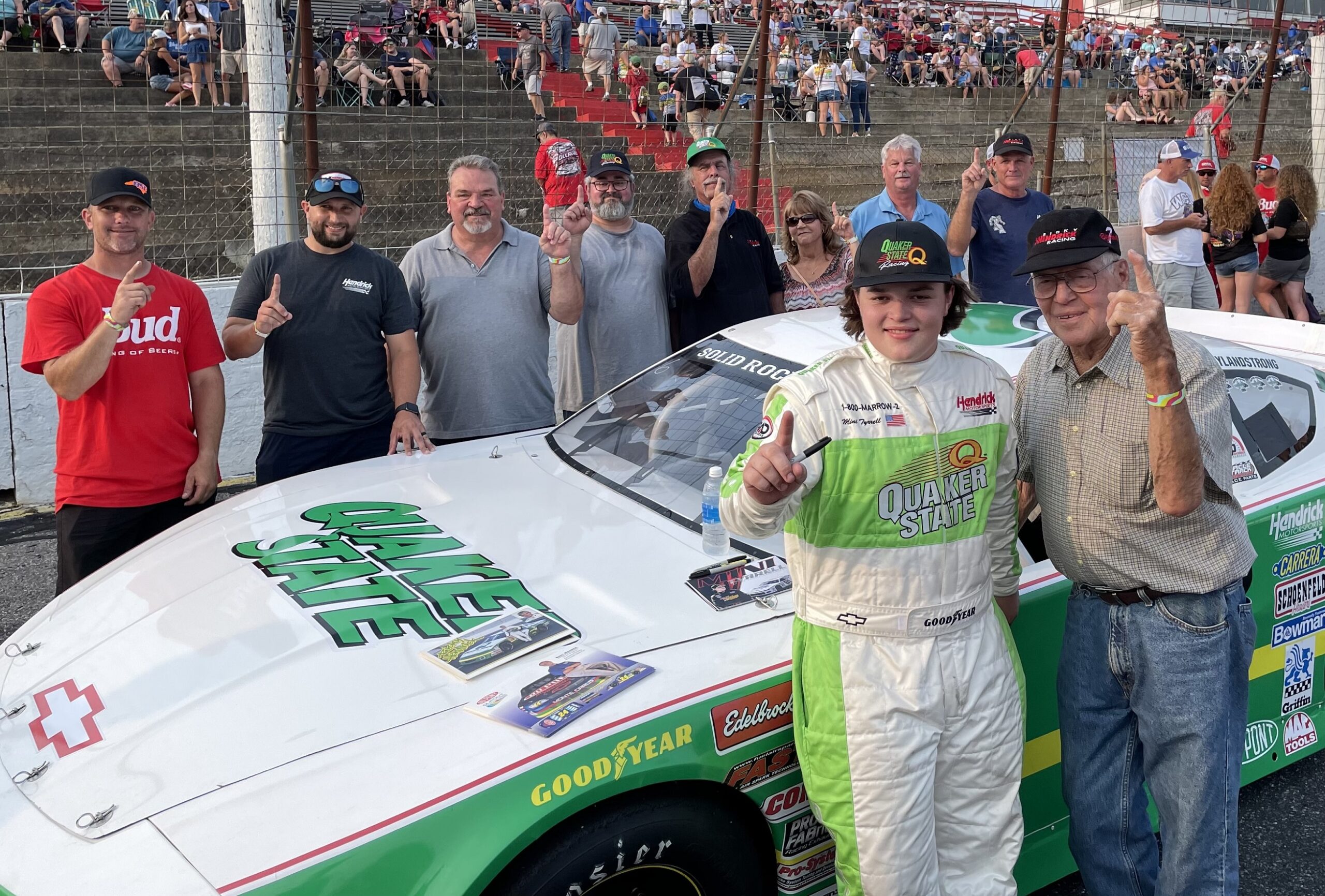 "This was one of the highlights of my life. Our wins and the times we spent were special, but I took it for granted. I took nothing for granted on Saturday." -- Michael Myrick, Ricky Hendrick's cousin and a member of his Late Model team

The annual CARS Tour Throwback weekend is always a mid-summer highlight on the schedule and this year's foray to Hickory Motor Speedway exceeded all expectations. The Quaker State team honored the late Ricky Hendrick and his #7 Late Model team from 1997-1999 with a Throwback paint scheme similar to the one that Ricky drove to four victories at Concord Motorsports Park.

Eight members of Ricky's 1998 team were in attendance as the Quaker State team posted a solid 4th place finish. In addition, the team led a CARS Tour race for the first time.

After two days of testing and practice at Hickory Motor Speedway, the team raced through two early practices on Saturday afternoon. The moment that brought everything full circle arrived shortly after 2:30 pm. Frank Edwards, Tony Bunnell, Tom Darling, Rick Blackwelder, Ricky Blackwelder, Michael Myrick, and Danny Pledger walked into the pit area and approached the race car that bonded them as a team with Ricky nearly a quarter century ago.

One of the most memorable moments came when Ricky's 1998 crew from Hendrick Motorsports helped push the car to the grid prior to qualifying. A strong 4th place qualifying effort set the stage for the 138-lap feature. It was almost surreal to look at the second row on the starting grid and see Jonathan Shafer in the #25 Folgers Coffee car as a tribute to Tim Richmond, as several of Ricky Hendrick's crew members also worked on the #25 car in the mid-1980's when Richmond drove for Hendrick Motorsports.

When CARS Tour flagman Brandon Willard waved the green flag shortly after 9 pm, the Quaker State Chevrolet ran side-by-side with the Folgers Coffee machine into turn 1. It was a moment of pride for the current and former Hendrick Motorsports employees and family members who attended the race.

After pulling ahead of Shafer on the opening lap, the Quaker State Chevrolet dropped back to 4th after Craig Moore went by on lap 3. Polesitter and eventual winner Josh Berry slowed his pace in the opening stages as the #7 car zoomed back into 3rd on lap 4. As the field began stringing out, the Ricky Hendrick Throwback car moved into the runner-up spot on lap 19 with an outside move on Moore. Five laps later, as Ricky had often done at Concord Motorsports Park, the #7 car took the race lead on the outside line.

With Ricky's former crew chief Frank Edwards looking on from pit road, the lead was extended to nearly a full straightaway as the competition caution slowed the field on lap 40. After clearing Moore on the restart, the #7 Quaker State Chevrolet paced the field through the next competition caution on lap 80. During the run, crew chief Brandon Butler urged his driver to slow the pace to conserve the right front tire for the later stages.

The outside line was the choice for the restart as Berry tried to wrestle the lead on the inside. After a caution for Timothy Peters' crash on lap 85, Berry made the move to the lead on lap 87. Three laps later, Mason Diaz took the runner-up spot. Sam Yarborough passed on lap 99.

After getting squeezed in a 3-wide battle on lap 128, the #7 Quaker State Chevrolet slipped outside of the top-5, but a caution flag for a mid-pack spin resulted in the field being set according to the last green flag lap completed, which allowed the team to remain in 4th place.

A slow leak in the left rear tire, which was discovered after the race, hindered the handling on the car in the closing stages. The most memorable moment of the night came after the checkered flag with the car parked in front of the hauler. Frank Edwards was the first at the window net to greet the driver, just as he had done in the late-1990's when Ricky drove.

The 4th place effort was the team's third consecutive top-6 finish on the CARS Tour, and vaulted them up to 7th in the series points standings.