The CARS Tour banquet in mid-December saw the debut of Mini's biggest fan. No, it's not a person. It's actually a white box fan with an ultra-cool cover. There is an interesting back story on its creation and existence.

If you've ever stayed in a hotel, unless you're a heavy sleeper, you've probably be woken up either late at night or early in the morning by guests opening and closing doors. A box fan tends to provide "white noise" that blocks out the irritation of hearing doors opening and closing, along with noisy guests in adjoining rooms.

I kept the box fan in the back of the SUV during the 2019 season on the CARS Tour. As we walked into the hotel after the practice day at the final race of 2019 at South Boston Speedway, Mini looked at the fan and said, "Start an Instagram account for the white fan." Hey, it was a direct order from The Boss! Within an hour, "TheWhiteFan" existed on Instagram (psst.. if you haven't already followed -> The White Fan.

What was supposed to be a simple weekend joke wound up taking on a life of its own. The White Fan has been around the Charlotte area over the last few months. When I visited California and Arizona in early December, I realized we needed to improvise since I wasn't about to pay a checked baggage fee for an oversized luggage item. A quick trip to Target in L.A. for a "backup" White Fan did the trick. On the west coast, The White Fan visited Santa Monica and then crossed I-10 into Arizona where it visited the red rocks of Sedona and the desert hills of Tucson -- complete with an amazing shot in a field with a cactus.

One of the more unique stops was the Mexico/U.S. border just off I-8. The White Fan came within 50 feet of the border fence before common sense took over. It was almost sad to return the "backup" to Target on the morning I flew back east. It had certainly gotten around the coasts and deserts.

As we headed to the CARS Tour banquet, Jessica Cann from Black Acid Apparel designed an incredible cover for The White Fan. Sure, the night was reserved for Mini's formal acceptance of the 2019 CARS Tour Late Model Rookie of the Year Award, but clearly there were eyes on The White Fan and its cover.

We marveled when Garrett Smithley came over almost wide-eyed and said, "So THIS is The White Fan?!" as if he had just seen Richard Petty at driver intros.

The White Fan is planning an active 2020 season. Be sure to see it at all Fan Fests on the CARS Tour! 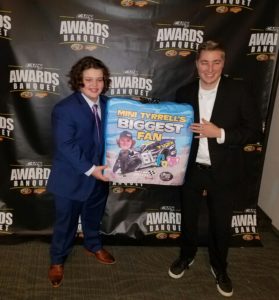